Climbing the Acatenango Volcano in Guatemala: a must do! 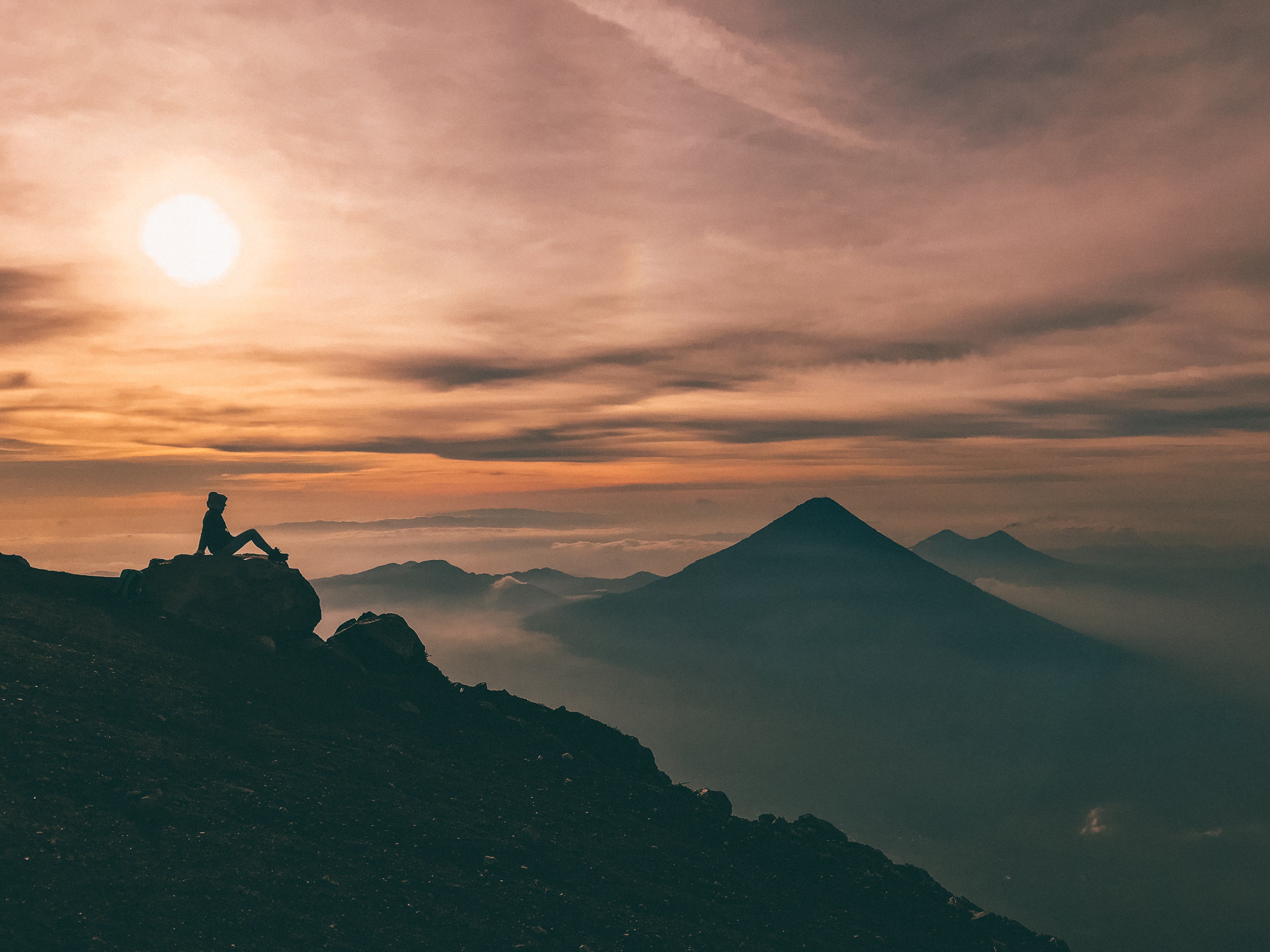 One week later and I’m still overwhelmed by climbing the Acatenango Volcano in Guatemala. It was the best experience during my worldtrip so far. So are you going to Guatemala? Then you HAVE to do this hike for sure. In this article I’ll tell you everything about it, including great pictures and practical information.

Where is the Acatenango Volcano located?

The Acatenango Volcano is located close to Antigua, an amazing city that you’ll visit for sure. The volcano is the third largest in Guatemala and his last big eruption was in 1972. That’s why you’re totally safe to go to the top, which is 3.976 meters high. The Acatenango Volcano is surrounded by other active volcanoes and during the hike you have the best views. How the hike is like? Keep reading on to find out more! With five liters water per person, a bag full of warm clothes, a camera and a good mood you start the hike. It’s a great warming up, because the first hour is the most difficult part of the whole day. You have to walk up for one hour, crossing some beautiful corn fields. There is not much high vegetation, so it’s pretty exhausting when the sun shines. The first five minutes are okay, but after ten minutes you have to stop to get some air. After fifteen minutes your upper legs will hurt and after half an hour you have to go up some endless stairs, made of bamboo. After one hour you reach the entrance of the park and you’ve probably drunk one liter water already. At the entrance you can rest for a bit before you continue the hike. After you’ve rested, the landscape is changed in a cloud forest. High trees, green moss, lianas of meters long and beautiful plants decorate the environment. And luckily it’s a bit colder up here. You’re much higher and you’re surrounded by big trees, so that’s a pleasure for sure. You have to walk through the cloud forest for two hours before you arrive at the lunch spot. It’s a beautiful walk! At the lunch spot you have time to relax and eat for half an hour. And when you’re sitting there with your wrap, you’ll notice that it’s actually pretty cold. A legging or an extra shirt is not unnecessary. You continue the path with new energy, but the landscape has changed again. This time it’s more mysterious. You’re now into a forest of naked trees and it’s very impressive to see. Like you’re walking in a fantasy movie. Luckily, this part is not that hard. You still have to walk up, but it’s not so steep anymore. However, I already had lost a lot of energy during the first three hours so this still was a tough part to hike. But after reaching the camp, you forget all the pain in your legs. The guides are setting up all the tents and the only thing that you have to do is making it yourself comfortable. Put on a sweater, dump all the weights that you’ve carried during the hike and enjoy the wide view. Right in front of you, at two kilometers distance, the Fuego volcano is located. Fuego, which means ‘fire’, is very active and this guy erupts every fifteen minutes. While you’re relaxing at the campfire Fuego is giving an amazing show, with spewing lava, big smoke clouds and VERY loud pops. But the real show is starting when the sun goes down. Because lava is fluorescent red, you can see the lava the best when it’s dark. The volcano is spewing lava with a lot of force, right into the sky. After that the lava drips down on all sides of the volcano. I can’t even describe it, it’s just so impressive. And you see all that while having dinner at the campfire. How cool is that? You’ll go to bed very early, because you can’t do much at the top of a volcano. Besides, the alarm is going at 4am to continu the hike. But you won’t have much sleep as the volcano erupts many times at night. When he erupts you’ll probably unzip your tent as soon as you can to see the lava. Everyone next to my tent did the same, even the guides! It’s just too spectacular to see the eruptions.

It’s 4am: time to get out of bed to do the most difficult part of the whole trekking. You’ll probably be a bit weak, because of the intense day you’ve had and because of the lack of sleep. Besides, you’re at 3.500 meters high, so that will make you weak for sure. My group had some difficulties too: one person was a bit sick, the other one was dizzy, someone didn’t even reach the top and me? I had such headache. You can reach the top in one hour, but because of some weak bodies it took us two hours. When you finally reach the top you will have the best view over the most beautiful sunset EVER. I’ve seen some gorgeous sunsets in the past, like the one at the Bromo volcano in Indonesia, but this one is unbeatable. I’m not even going to try to describe this, you just have to see it yourself. Watch this (although it was even more beautiful in real life): From the top you have a panoramic view over the volcanoes Fuego, Agua and Pacaya. The clouds are right under your feet, the soil of the volcano is black and you have an awesome view, no matter where you stand. This is it. This is the view you were coming for. The burn in your legs, the heavy luggage you had to carry with you and your wet back were so worth it, because this view is unforgettable. After taking more than hundreds pictures, it’s time to go back to the camp. Because of the thick layers of volcano sand, you can literally run downwards, so you’ll be at the camp in no time. Here you have breakfast with the other trekking mates before you take down the tent and start the hike back to where it all begun. They say it takes about three hours to go down, but our group hiked back to the starting point in two hours. It’s way better to run, otherwise your knees will collapse. It’s very steep so if you take it easy, it will hurt like crazy. Just run and have fun! You cross the mysterious forest again, just like the cloud forest and the corn fields. Congratulations: you have survived the two day trekking!

The Acatenango volcano is not for everyone I think everyone with a healthy condition can reach the top of the Acatenango volcano, but it’s definitely not easy. Some people don’t reach the top at all and my group had some difficulties either. But that’s not weird at all. On the first day you have to hike five hours up and there are many steep areas. Then you will have a shitty night and THEN you have to hike for a couple of hours again. But let’s not forget that you’re walking at 4.000 meters high, which will make you a bit sick. Are you staying at a low area before you go on this hike? Then it’s definitely possible that you get sick.

Which organization is the best? Many organizations are offering this tour, but most of them are not that good. The cheap organizations are hiking with groups of 30 people and believe me: that’s NOT what you want. I’ve chosen for Old Town Outfitters and we were with seven people in total, including me and my boyfriend. We’ve read a lot of positive reviews online before we did this hike, so it wasn’t just a random guess. The size of the group was very important to me, but also if the guides spoke English. I can speak a little bit Spanish, but I still wanted a guide that spoke English so he could tell me more about the volcanoes, about the area and about Guatemala in general. The other organizations only offer guides who speak Spanish. Another reason why I’ve chosen Old Town Outfitters is because of the good material they bring. The tents and the sleeping bags are of good quality, so you won’t be that cold at night. Besides, they set up the tents every time they go up the volcano, while the other ones keep their tents over there. The quality of the tents will be bad very soon, because of all the rain and wind. And because of that, you’ll freeze at night. I’ve also heard that you still need to pay the entrance fee while this was already included at Old Town Outfitters.

How to prepare the hike You have to prepare this hike well. Before you go, you should think about what to bring and what to buy beforehand. It’s also good to know that you can hire a porter who can carry some of your stuff to the camp and back. I wanted to carry all my stuff myself, but after reading a lot of reviews about this I decided to hire a porter. And I’m so glad I did! The hike itself was pretty heavy and I would’ve gone crazy if I also had to carry fifteen kilos. Almost everyone hires a porter, so it’s totally normal. Luckily you’ll drink most of the water on the first day so you’ll loose a lot of kilos quite fast.

This is what I’ve brought with me and that was exactly enough:

On the first day I wore shorts with a shirt and my mountain shoes. It’s important to bring some warm clothes and enough layers, because you’ll sleep in it.

Are you excited to do this amazing trekking? Take a look at the website of Old Town Outfitters fore more information. Do you like adventure, like me? They also offer other awesome trips, like mountain biking, rock climbing, kayaking, rafting and more!

Here are some more photos of the Acatenango Volcano trekking: