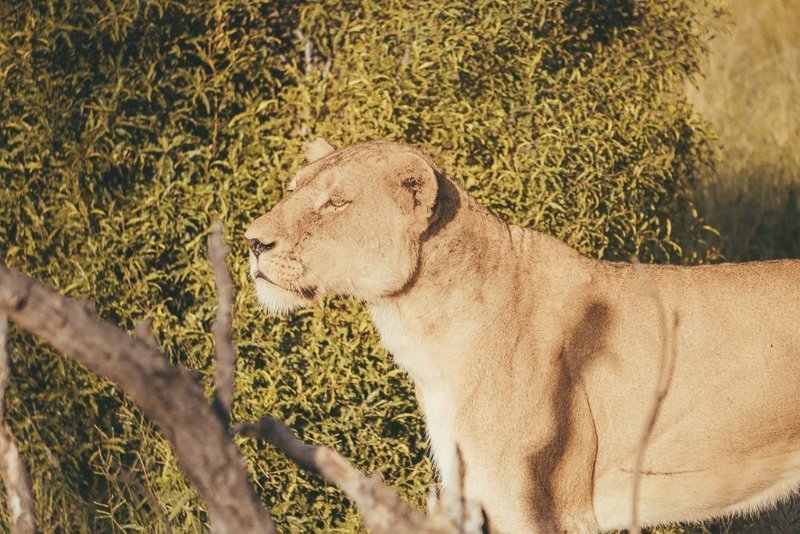 Have you always dreamed of an awesome safari trip through South Africa? Well, I have the best South Africa safari itinerary for two weeks or longer. Are you ready?!

The Welgevonden Game Reserve is by far the best safari park in South Africa if you ask me! It’s just a four or five hour drive from the airport of Johannesburg, and you don’t need a four wheel drive to get here (although a four wheel drive is better). During the way you’ll spot many animals next to the road. Especially during the last hour of the roadtrip, you’ll see a lot of zebras, giraffes and gnoes. So cool!

When you have finally arrived in Welgevonden, you can do several safaris. I did a night drive and an early morning drive and both were amazing. The park is very quiet and still an hidden gem, so you won’t see other tourists during a South Africa safari. That’s the advantage of Limpopo, the province where Welgevonden is located. It’s still undiscovered and that makes this park incredible.

In Welgevonden you can see the Big Five: lions, elephants, buffaloes, rhinos and leopards. I actually saw some rhinos, lions, elephants and a cheetah. And of course the ‘regular stuff’, like zebras, gnoes and giraffes. The rangers are very good and they won’t chase the animals, like they do in Krugerpark.

Hotel tip! You really have to stay in the Kololo Game Reserve for a couple of nights. I absolutely loved this lodge. It’s located right next to Welgevonden and it has its own reserve as well, where you can hike and cycle between the animals!! Of course all the animals in the reserve don’t attack people, so you won’t find elephants, buffaloes and wild cats in this park haha. But you do see giraffes, zebras and gnoes right in front of your lodge.

The next stop of the South Africa safari itinerary is Mgwalana in the north of South Africa. You have to drive for another five hours to get here, so I recommend staying in Kololo for a couple of nights and then two nights at Mgwalana. You won’t see the Big Five here. However, you can spot many giraffes and also all the little creatures, which you won’t see in other Big Five parks. And this area is also very popular for snakes and crocodiles!

Hotel tip! I recommend staying in the Mgwalana River Lodge, which is a gorgeous lodge right next to a river. You can relax big time over here and the rooms are stunning. I have to say that the food isn’t really the best you’ll ever have, but hey… if it’s a beautiful place, food is just an detail, right?!

Okay so this area is not located in South Africa, but in BOTSWANA! Say what?! Did you know you can cross the border within a couple of minutes? It literally took me less than an hour to get to Northern Tuli. And it’s also very easy to go back to South Africa after one or two nights (although I recommend spending more nights in this area).

Tuli is absolutely stunning and this was by far my favorite park of the South Africa safari itinerary, because the landscapes are insane! The area is full of yellow flowers and it looks like a fairytale. Seeing huge elephants standing in a field of cute yellow flowers is just unreal.

The Northern Tuli Game Reserve is not only known for its stunning nature, it’s also known for the leopard. The chance of spotting a leopard during a game drive is quite big. Unfortunately I was unlucky and according to my rangers it was their first time not seeing a leopard around. How crazy is that? Besides leopards, you can also spot hyenas, lions, wild dogs and all the other amazing creatures.

Hotel tip! I recommend staying in the Tuli Safari Lodge, which will blown your mind. It’s very luxury and very beautiful. The safari tents are huge and you’ll have your own lounge room, insane shower, huge bath and a queensize bed. Definitely the most luxury accommodation I stayed in during my South Africa safari itinerary!

This park, which is called Mapungubwe, is located just 30 minutes from the border of Botswana. You can do a self drive through the park, but a walking safari with a guide is even better. In the park you’ll spot elephants, giraffes, zebras, impalas and gnoes. You’ll learn more about the history of South Africa at the same time, because they found some really old pieces in here. Don’t forget to skip the Elephant Valley when you’re doing a selfdrive, it’s so cool!

Hotel tip! I recommend staying in the Mopane Bush Lodge, where you sleep in a yellow chalet. Some bungalows have their own little pool, which is definitely needed in this dry area. The lodge itself has a huge pool as well, so you definitely won’t get bored. You can go on a fun safari within the reserve or drink cocktails at the bar next to the pool. Oh and the food is delicious!

From all the areas I’ve seen in South Africa, this is definitely the most special one of the South Africa safari itinerary. The views in this mountain range are stunning and the game drives are really cool. You can spot some amazing creatures in the valleys of the area AND you can see Zimbabwe and Botswana on a clear day. You can do game drives and bush walks in the mountain range.

Hotel tip! I hiiiiighly recommend staying in the Leshiba Wilderness Lodge, which used to be a traditional village in the mountains. You sleep in a traditional rondavel and the view from here is incredible. While you’re drinking a beer or taking a bath in the lodge, you overlook the valley where you can see all the animals. AWESOME!

The last stop of this ideal South Africa safari itinerary is Great Kruger, which is located next to the famous Krugerpark. I know a lot of people want to explore this part of South Africa, but I recommend staying in Great Kruger. It’s more quiet, it has some amazing lodges and you can do an amazing walking safari over here. I did a game drive in Manyeleti Game Reserve, which is actually the same park as Kruger (the parks are not separated from each other with fences), but less busy. We saw lions, hyenas, elephants and way more other animals in this area.

Hotel tip! I recommend staying in the Ngama Tented Safari Lodge, which is so peaceful. The monkeys are saying hi in the morning, buffaloes are walking in front of the lodge and you can sleep in a luxury tent. Dinner is veeeery yummy over here and you can have dinner right next to a campfire, which makes the South Africa experience complete.

This amazing South Africa safari route is just close to Johannesburg, so definitely go to Johannesburg as well. It is an amazing city to explore for a couple of days. My tip is to stay in the 12 Decades Art Hotel, which is located in the best area of Johannesburg.

Wanna know more about the province Limpopo (this safari route is located in Limpopo)? Just check out my article about Limpopo to read (and see!) more about this gorgeous hidden gem of South Africa!